Got a E50 kickstart that I was putting back together and keep having issues.
The first issue is it would not return when I kicked it. I replaced the spring and the plastic spring guide. The spring was sliding underneath the kick spring and pressing it up. It would get stuck between the guide and the gear so you couldn't bolt the cover on. I ended up ordering a new spring and retainer from Puchshop. This solved that problem, but the kickstart would still not return when it was on the engine.

After messing with shims so many times I figure out that the shims were about 3 thousandths of an inch different. I put the thicker one on the kick start gear and the thin one on the second gear. With this configuration it finally returned after kicking. But it still wasn't that smooth.

Brent came over with his kick start to compare stuff. I noticed my gear wobbled in the cover a lot. The hold for the gear is slightly worn out so its causing the gear to bind up. I don't think there is any fix for this so Ill just have to live with it.

I buttoned it up and after a couple of kicks, it stopped engaging. I took it apart again to find the clutch nut had backed off. After more investigation, I found I am missing the clutch washer. So now I have to make one of those and then everything should be good.

New and old spring and retainer. 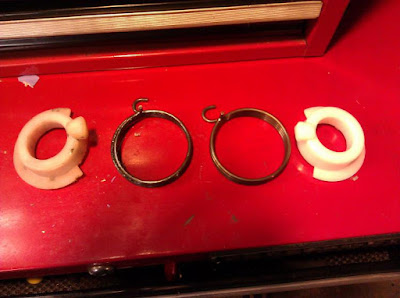 The old spring and retainer. The spring was sliding over the edge. 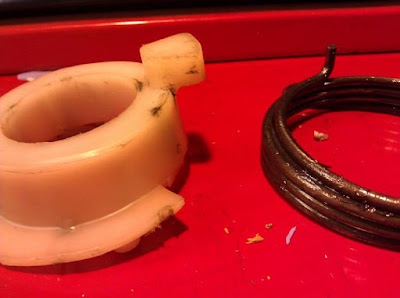 The two shims were on the wrong gears. They are just slightly different thickness. 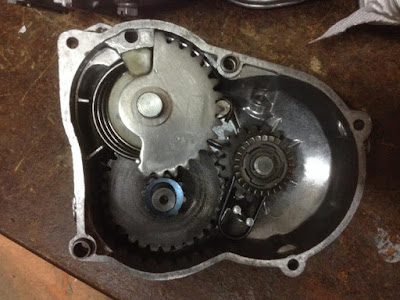 I am missing the washer under this nut. 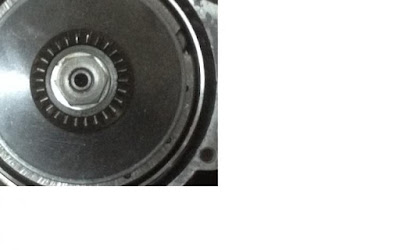 This video shows how much slop I have in the gear.